A Breakthrough In Cognitive Assessment and Rehabilitation 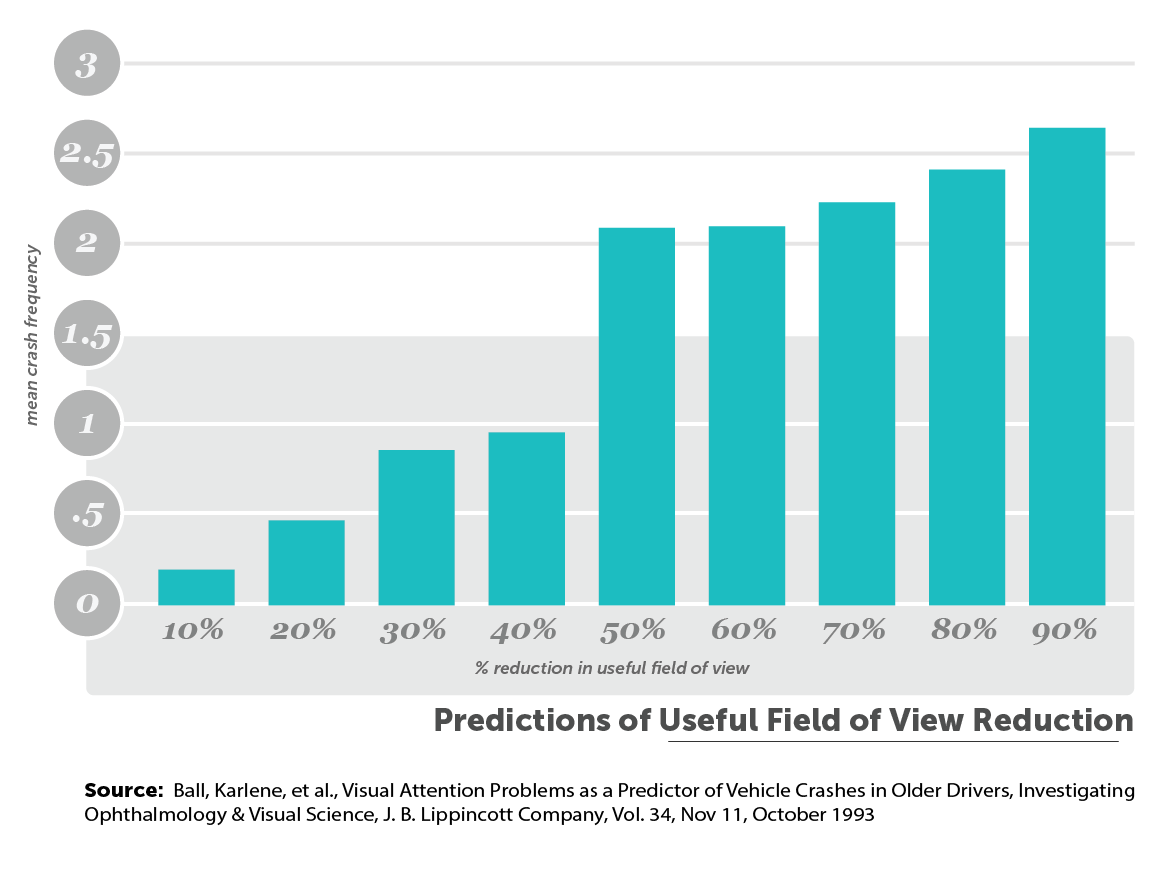 At Visual Awareness Research Group, Inc. cognitive impairment is defined as a 40% or greater reduction in one’s Useful Field of View—40% being the point of greatest increase in crash frequency.  Alternatively, it has more recently been defined in terms of speed of processing.

Millions of senior drivers are adversely affected by such impairment, robbing them of their freedom as it diminishes their ability to drive safely. They can become prisoners of their own home—unable to drive to the supermarket or doctor’s office, or to visit a loved one. And every day, healthy, older drivers face arbitrary driving restrictions based on common stereotypes of age-related declines in vision and cognition.

It’s time to help them regain their freedom. UFOV®-based testing and remediation programs are readily available through Posit Science, Inc. (our exclusive licensor).

The roots for the development of the UFOV® test stem from earlier work in vision and aging. In this work we were interested in the everyday visual problems of older adults, and understanding the basis for these difficulties. Many older adults reported what they termed “vision problems.” They expressed difficulty in driving, walking, and other mobility related activities which were not the result of any physical impairment. For example, they reported that other cars, or even other people, surprised them and seemed to come out of nowhere. They reported difficulty finding things when a visual search was required. They reported difficulty with left hand turns, and they reported that it took longer to do things now than it used to. Other common complaints related to divided attention, and difficulty with the complexities of driving in traffic while searching for a particular street sign. Things were even worse in the presence of either background noise or lots of other signs in the vicinity.

Based on these self-reports, and a review of earlier studies on age-related difficulties with visual search, an early version of the UFOV® task was developed. In this version we varied the degree of difficulty of a center task, stimulus duration (the length of time a target was available for processing), the presence of distractors in the background, and the eccentricity of peripheral stimuli. In order to generate all combinations of these factors, it required several hours of data collection per individual to obtain a baseline level of performance. We were also interested in whether practice with the task resulted in improved performance.

Through many years of systematic study of this task, we developed the concept of the UFOV® as a spatial area. The size of this area (e.g., the window of attention) was found to vary depending on task demands within an individual. Furthermore, it was quite clear that the size of the UFOV® varied greatly between older individuals. We then began to evaluate the size of the UFOV® as an indicator of crash risk and other mobility problems. Through these studies it became clear that UFOV® was clearly a better predictor of crash risk than other visual or cognitive measures we evaluated.

While further studies on the effectiveness of UFOV® as a risk factor for driving and mobility loss were underway, we sought to answer very pragmatic issues related to its use. For example, what was the minimal amount of information needed to provide a valid prediction (e.g., how could the assessment be shortened, if at all, while retaining predictive accuracy)?  Another question related to the number of trials needed to obtain a reliable estimate of performance. We also found that the size of the UFOV® was in direct proportion to the stimulus duration, thereby allowing us to develop an even briefer version of the test, which was then validated against the longer version.

Use of this measure has escalated over the years as more and more researchers include the assessment in a variety of research paradigms. In addition to studies evaluating risk factors for driving, the UFOV® measure has been used in a variety of other research studies where cognitive decline may be present. The UFOV® test is consistently a better predictor of real world performance than other vision tests in part because it employs suprathreshold targets, and evaluates visual performance under a variety of cognitive demands. Real world activities require visual processing capabilities, and UFOV® is a measure of this capacity. 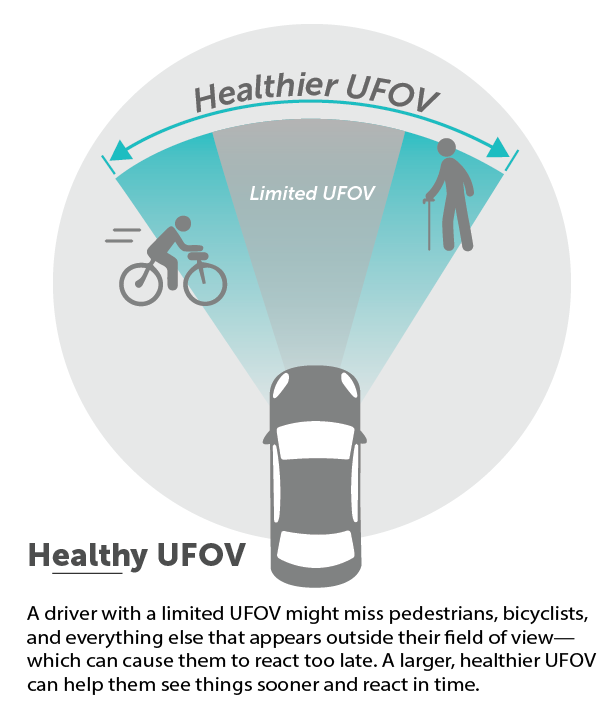 Useful Field of View:
The area from which one can extract visual information in a brief glance without head or eye movement. The limits of this area are reduced by poor vision, difficulty dividing attention and/or ignoring distraction, and slower processing ability. 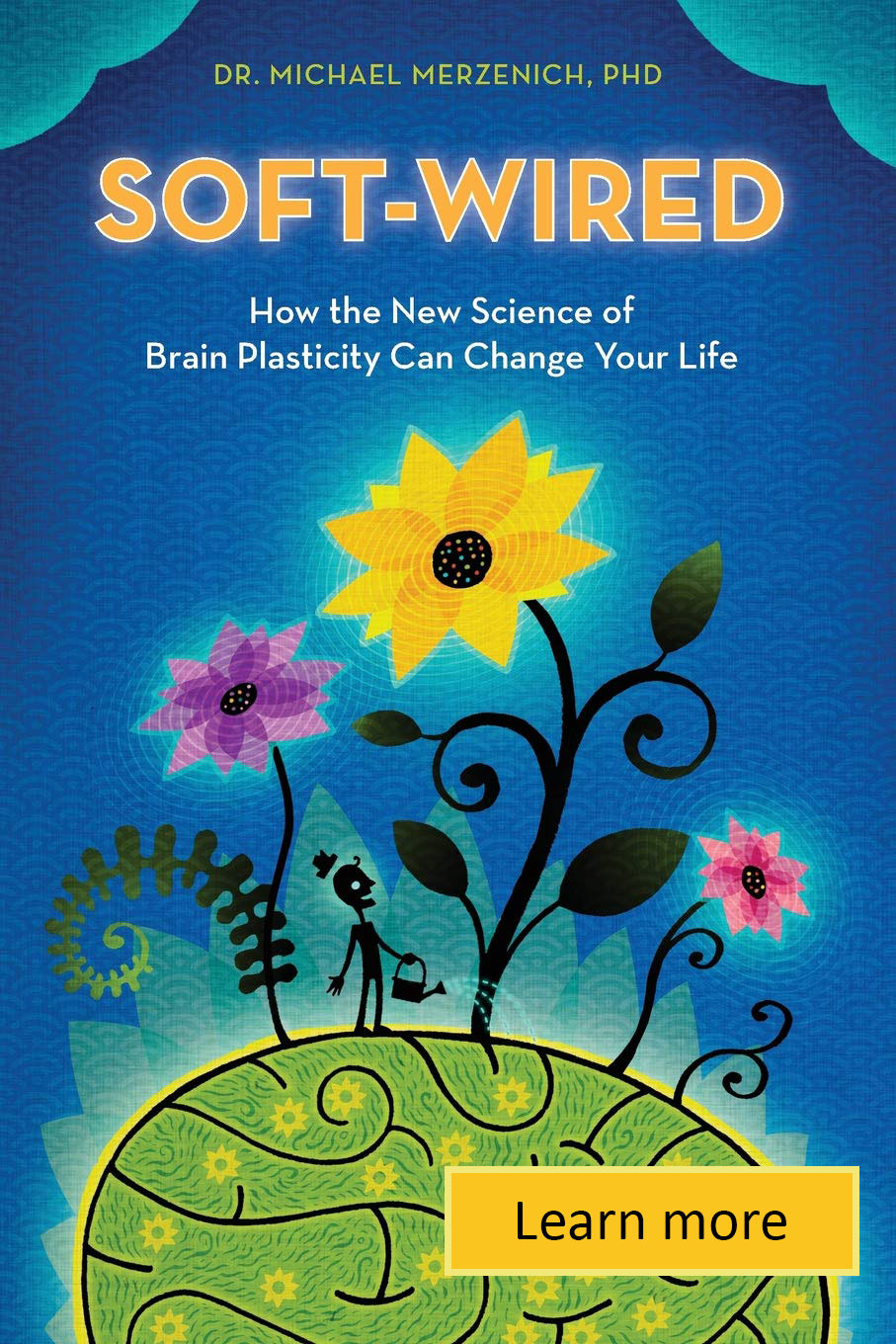 UFOV® Research Has Been Funded By:
Go to Top